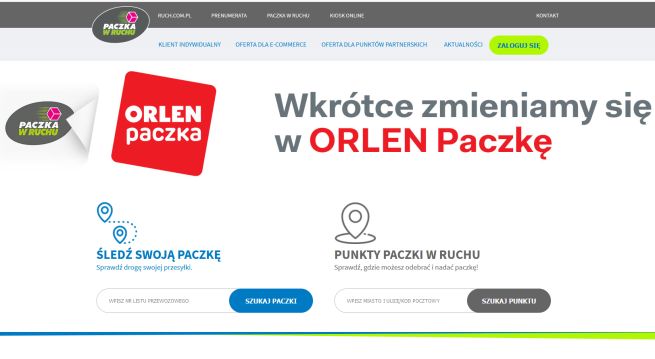 Orlen asserts that it is developing the courier services sector, actively using the capabilities of Ruch. The company is developing cooperation with online stores that will be able to offer an attractive delivery offer to customers. Integration with the Orlen Paczka service will be available on e-commerce platforms, and new business customers will be able to take advantage of a special promotion to start the service.

The service of sending and receiving parcels will be available by the end of the year in the amount of more than 5.5 thousand. Orlen Paczka Grid Points.

Earlier, in September, Orlen Paczka vending machines will be installed at about 200 locations in Polish cities.

Customers will be able to use a mobile application that will allow, among other things, the contactless collection of the parcel from the parcel machine.

Read also: Orlen is looking for locations for its parcel machines

Work at Orlen Paczka is in line with what was announced at the end of December last year. The company’s strategy until 2030. It also includes the development of the non-fuel supply, which will be based on the Ruch network (the company bought stakes in this company in December last year). According to the assumptions, on the basis of Ruch, PKN Orlen will develop store and restaurant formats outside gas stations, and will also expand its own network of parcel collection points and e-commerce offering.

In June, Orlen opened its first store and catering facility in Warsaw under the Orlen brand in Ruch. By the end of the year, the company wants to have 40 such points across the country and will create 500 of its own automatic parcel picking machines.