yesterday Glovo Launched a promotion and provided a discount code Black Fridayallowing you to shop with 125 PLN discount. As you can easily guess, the user response was phenomenal, and the platform’s website experienced a real siege. Funds can be used on order via the app, and of course people were eager to use this option. But the joy did not last long After some time, the granted funds started disappearing from the accounts.

In some cases, this only resulted in the order being cancelled, but there are also reports that Glovo did not use the awarded funds, and Instead, they paid for it from the attached card. As you can imagine, the fact that the top-up was withdrawn, the value of which was probably mistakenly too high, upset society, and the second of these problems heated up the atmosphere even more.

The rest of the material under the podcast window technically:

Netizens never leave a thread dry on Glovo. Application received recently Lots of negative reviews on Google Play StoreWhere people clearly indicate the problem described in the discount code. Moreover, the same was also present on Glovo’s Facebook profile. reached the point where The latter has been completely deleted from posts. Profile managers They also do not respond to private messages. 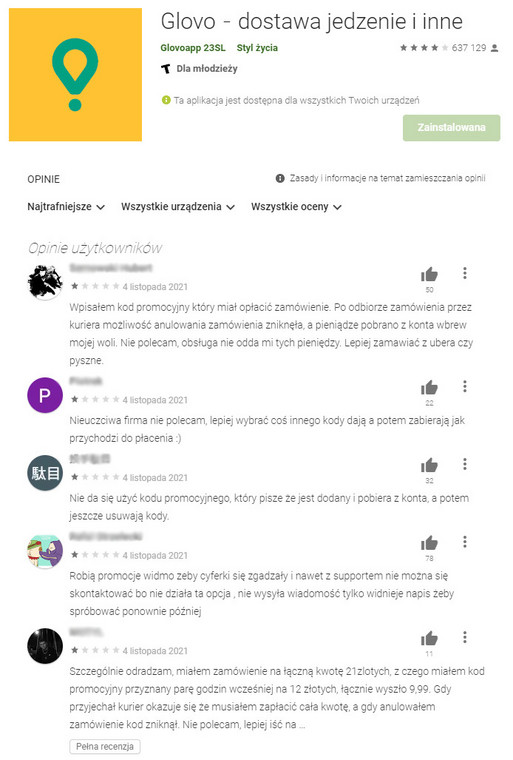 In the described situation, we contacted the agency that supports Glovo in Poland. Unfortunately, we did not receive a response until the text was posted. When it appears, the text will be updated with it.

At the same time, we would like to remind you that a public referendum organized by the Technology Awards 2021 is underway, in which the best smartphones, TVs, games and other new technologies are selected. There are special prizes for voting!