What a way to blow up the fence! EA Sports and developer studio EA Tiburon provided true visual enjoyment in Madden 22.

It is important to note that the perspective from which you will be reading this review, is practically a newbie perspective on Madden. I have to say that for several years I haven’t laid my hands on a game in this franchise so playing it and adapting a little to it was nothing, but it wasn’t easy at all.

It is worth noting that at that time, of course titles such as NFL Gameday, who developed the now defunct 989 Sports Studio. The same way he played it NFL 2K. But the change to Madden is already too drastic, for noob Like your servant, I repeat, it was very difficult to adapt and learn to operate it from the start.

My experience playing Madden 22 has been practically playing pure exhibition matches, ever since I got fully into the Fashion franchise, which is one of the most requested game modes by the fans of this game, its implementation was quite complicated. However, I can tell you that managing a professional NFL team takes a lot of dedication and Madden 22 makes it very clear.

Now, going back to what I learned in Madden 22, as I was saying, what I enjoyed the most was the show games, but the amazing thing here is that in every stadium, in every instance of time, everything changes. the wind in soldier fieldChicago is a huge factor in seeing how the ball moves.

Also, depending on the conditions of the match, the call may or may not appear. Gameday momentum, where the fans will be able to “press” the opposing team in a certain way and this can affect the opponent’s performance. I really liked this feature, because you can literally feel like you are in the stadium, listening to the cheering of the fans.

An important part that you have to feel as if you were really on an American football field, is precisely Gameday momentum, but, this is not every thing. Depending on the scoreboard, your team’s relegation or promotion can have a huge impact on players, especially your midfielder.

Since QB is practically the captain of the team, in Madden 22, if your team goes down on the scoreboard, it’s very likely that your quarterback will start to wiggle. If you feel pressure from the defensive line, the ball may drop early or make a mistake and a bad pass.

The players’ animations, gestures, postures and celebrations are amazing. all The non-playable character The reason for his existence, and now the animation in the fans is even more surprising.

Fashion franchise. Manage a team to your liking

I have to be honest, this is the mode that I explored the least in which you will definitely have to invest several hours playing it to become the perfect boss.

Feel like you’re at a press conference, being questioned by dozens of reporters, while the technical director answers reporters’ questions.

In Madden 22, this mode has been greatly improved and you can now review how your team prepares for the next match “weekly”. If you can do it efficiently, you will notice a good performance from your team and you will be able to stand up to what the opponent is doing.

The skill tree will not only focus on the players, but also on the head coach, physical coach and offensive coordinator, wow, it will be a daunting task to prepare for the next match and identify the strengths and weaknesses of each team.

Of course we couldn’t run out Ultimate team and without the yardwhich has not undergone significant changes.

In The Yard, you will play 6 vs 6 games in different scenarios, in cities like London and Hawaii.

Another game mode that received minor changes is The face of privilege, where you can now play as a quarterback, a wide receiver, a running back or even a midfielder.

Madden 22 has reached such a high point that we can consider this title as more than just a game, it is a real game simulation, where you will know the intimacy of a professional NFL team and where you must learn to build a temple that will allow you to stand as head coach, but from the comfort of your seat. Although if you want to play, as I did, a simple exhibition match with your friends, you will have a lot of fun with it. 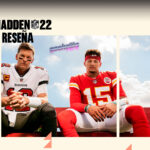 NSsPlay Reviewed on PlayStation 5, thanks to a copy provided by Electronic Arts.

Always remember to visit us at Geekzilla.Tech