Work on the Škoda 1100 OHC racing model entered its final stage at the end of 1957. The car was intended for long-distance racing. Initially, two open models were built, and in 1959, two coupe models were built. The red convertible is now part of the collection of the Škoda Museum in Mladá Boleslav.

The production of two-seater sports cars began in the spring of 1956. Its goal was clear: the race driver was to be behind the wheel, and the first car of this type from the Skoda factory was to go to Le Mans 24 hours. The Model 1100 OHC is based on a tubular frame made of thin-walled steel tubes welded together. This is what distinguishes the Skoda Sport and Supersport models from their predecessors – they used a modified version of the Skoda 1101 tough chassis. In order to achieve the best possible handling, the load was distributed evenly on both axles. The clutch, the five-speed gearbox and the transmission case were installed at the rear, where they formed a coherent assembly unit.

The driveline for the ŠKODA 1100 OHC is a longitudinally mounted four-cylinder in-line twin-ignition engine with two overhead camshafts in the cylinder head. With a volume of 1,089 cm3, it produced an impressive power at that time of 68 kW (92 km) at 7,700 rpm (the maximum speed was 8,500 rpm). Originally, the engine was powered by high-octane aviation fuel, which was poured into two twin carburetors of the Czechoslovak brand Jikov, and later from the Italian manufacturer WEBER.

The independent wheel suspension also played a very important role. In the front, a trapezoidal wishbone axle was installed, and the rear wheels, separated by 2200 mm, were installed on a wishbone pendulum axle. Guidance was accurate and direct. The 3-spoke steering wheel can be removed to facilitate entry into the vehicle. Another modern element is the 15-inch torsion bar suspension produced by Borrani.

Thanks to the use of fiberglass-reinforced plastic measuring 3,880 mm in length, 1,430 mm in width and 964 mm in height, the race car weighed only 583 kg. This allowed the 1100 OHC to achieve competitive acceleration and a top speed of 190 to 200 km/h. The low air resistance on the body designed by Yaroslav Kindle also contributed to this.

The combination of practice and elegance was reflected in the Type I folding headlights, which later had to be replaced by a more practical racing car solution. The second model had two headlights installed under the aerodynamic glass covers. 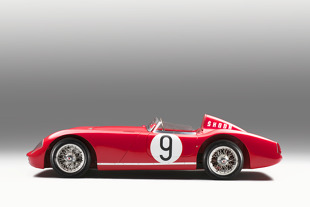 The premiere of the ŠKODA 1100 OHC was a huge success. At the end of June 1958, experienced driver Miroslav Vosk won the race on the city circuit in Mladá Boleslav. Rally drivers Senator Vaclav Bobek, Vaclav Tchaikovsky, Josef Widner and Jaroslav Bobek also got behind the wheel of this model in the following years.

ŠKODA drivers succeeded in motorsports events not only at home but also abroad, although the ŠKODA 1100 OHC was able to compete only in communist countries due to the difficult political situation in the Czech Republic in the late 1950s and 1960s. Plans to participate in the 24 Hours of Le Mans, however, did not materialize.

After the two open-top GRP models produced in 1957/58, there were two variants of the more spacious coupe with a closed body of aluminum profiles. In spite of this, the engineers managed to maintain the weight of these cars 555 kg while maintaining the maximum speed.

The open body racing car models are still in good shape. A copy of the Škoda Museum regularly participates in national and international events dedicated to the classics of cars. The second car belongs to Skoda UK and is used mainly in Great Britain for promotional purposes.

See also  The new Tesla Model S Plaid is getting hot and cornering the driver! In front of Elon Musk a big scandal