The red giant Betelgeuse is one of the stars that make up the distinctive shape of the constellation Orion. Brighter than the stars in the northern hemisphere of the sky. At the turn of 2019 and 2020, its brightness decreased to an extent not previously observed.

Remember the beginning of 2020 when astronomers tried to unravel the mystery of the dramatic dimming of Betelgeuse, one of the largest stars in our galactic region? Such skewed changes, even if models predict large changes in brightness, usually portend something unusual. This is unusual for an object at the end of its stellar evolution and could lead to a supernova explosion.

This idea was quickly picked up by astronomical sensation hunters, because supernovae, although relatively frequently observed, are a very rare phenomenon on the scale of a single galaxy. In our region, the light from a supernova (Kepler star) reached Earth in the 17th century. We haven’t seen anything since that indicates another supernova in the galaxy. The closest such eruption occurred as recently as 1987 in the neighboring Large Magellanic Cloud of the Milky Way.

Thanks to the first comparative observations, seeing the imminent end of Betelgeuse could have been postponed, but two equally likely options remain. Changes in the star itself, indicating a disturbance of the previous arrangement, or the expulsion of copious amounts of matter which, moving away and orbiting around the star, obscures its surface. The video above is an animation showing how the perceived brightness of the star has changed.

Today, a year and a half after these events, we already know which one should be identified as a solution to one of the biggest astronomical mysteries of the past decade.

Explanation of the secret dimming Betelgeuse. The second option was correct

Astronomers using the VLT telescope in northern Chile observed Betelgeuse not only in 2019, but also continued observations in 2020. In January and March 2020, images of its disk were successfully taken before it returned to its normal brightness in April.

Photos from January and March 2020 have not been posted before

Analysis of these images indicates that the star was obscured by a huge cloud of dust. However, these are not all conclusions. Where does this dust cloud come from? This is where theorists who know how star giants like Betelgeuse Job come into play.

Stardust, why all this fuss

The phenomenon we witnessed is related to the formation of star dust. Miguel Montargues of the team that made the discovery explains the process that led to it. You should know that the surface of Betelgeuse pulsates as a result of the constant movement of gas bubbles inside it. These bubbles shrink and swell as they move.

Such a bubble may accidentally detach from the star’s surface when it reaches the star’s surface, while simultaneously cooling parts of the star. The temperature drop is large enough for the escaping gaseous material to condense into dust. The video below shows how such a dusty shell can affect the brightness of a star. 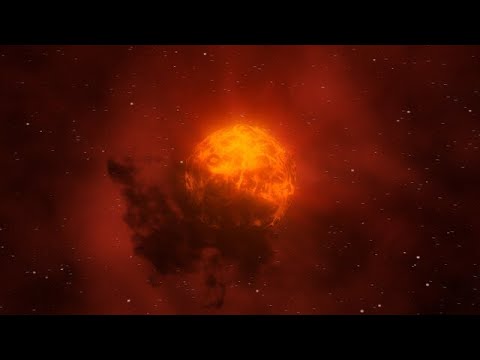 Why does stardust attract so much attention among astronomers? These explosions of matter may be one way of feeding interstellar space into the building blocks of future planetary systems in which life may one day be born.

The universe is not eternal

The adventure that happened to Betelgeuse shows that thanks to the development of observational techniques, we can find the correct interpretation of the astronomical mysteries that trouble us more quickly. It’s also an example of how dynamic the galaxy and the stars it’s made of can be. Emily Cannon of the Catholic University of Lowland, who was involved in the Monitoring Project, summed it up in a distinctive way – “When we look at the stars at night, these little points of light seem eternal. The blackness of Betelgeuse breaks this illusion”.

How do you see the universe and the stars, not to mention the planets, and what happens on them? As something permanent or the other way around? We are waiting for a response in the comments.