Gone are the days when gaming smartphones, which had nothing in common with a gaming device, regardless of the name and a fast processor, were supposed to be used once and for all. Meanwhile, some real gaming phones have appeared. The Asus ROG Phone 5 arrived in stores early 2021. And now Lenovo has also introduced this year’s smartphone to gamers: Legion Phone Duel 2.

Just like any other gaming smartphone, the second generation Legion Phone Duel is extremely powerful. The flagship Qualcomm Snapdragon 888 5G processor, backed by either 12 or 16 GB of RAM, makes a special contribution. The main memory is 256 or 512 GB – so there’s plenty of room for games anyway, even without the micro SD slot.

The AMOLED smartphone screen has a size of 6.92 inches. It’s almost tablet-sized, but resolution is still at Full HD +: 1,080 x 2,460 pixels. The pixel density of 388 dpi is in contrast modest. In contrast, the screen offers the only possible refresh rate for gaming devices: 144Hz, plus the sampling rate of 720Hz should not be despised.

The main camera in Legion Phone Duel is something special. Unfortunately not in a positive sense, as it only has a standard 64-megapixel (f / 1.9) sensor and a 16-megapixel wide-angle sensor (f / 2.2). However, at this point it should be noted that the camera is neglected in almost all gaming cell phones.

When it comes to the operating system, users do not have to accept any concessions, because Lenovo relies on the latest Google Android 11 software with its ZUI 12.5 user interface.

It is understood that the most important features of the new Lenovo mobile phone are mostly found in the gaming area. This initially includes a retractable 44MP front camera, which is placed on the side of the smartphone, just like before. The focus was on broadcast. That’s why, thanks to AI support, users are offered various functions such as background removal, animated glyphs, and real-time effects.

Another unique selling point for the Legion Phone Duel 2 is that the cell phone has been specially cut for landscape use. This applies to both the front camera, optics, and software. Moreover, the Lenovo device has an advanced cooling system with two mechanical fans that are supposed to effectively direct the flow of cold air through hot components, in addition to eight virtual buttons: “four buttons on the shoulder ultrasonic, two back, and capacitive touch points. And two on – Display Force Touchpoints. “

Finally, the gaming smartphone battery remains. This consists of two power stores with a capacity of 2750 mAh each. Thanks to the 90W charging power, it only takes 30 minutes to fully charge the phone, according to the manufacturer. However, the process is slightly different from almost all other devices. Like the previous model, the so-called “Turbo Charge” mode is only activated when two USB cables are connected to the mobile phone. This isn’t entirely practical, but the exact charging time turned out to be roughly correct in our testing of the first Legion Phone Duel.

You can buy the new gaming phone in two versions, with a capacity of 12/256 GB and 16/512 GB. The recommended retail price for the first version is 799 euros, while the cost of the second version (including the charging station) is 999 euros. Sales will start in May 2021. After that, Lenovo will offer both models in white or black. 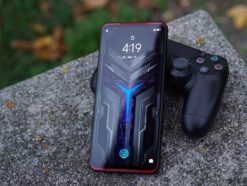 Are you looking for a gaming smartphone? You have to pay attention to this!